Whether we see it as a rat or a squirrel, the degu attracts curiosity due to its peculiar morphology, crossbreeding with several rodents. Despite its resemblance with a big gerbil, it is rather close to the chinchilla, by both its diet and its habitat which it shares in the wild.1.

It is often confused with a squirrel due to its muzzle, which shares some similarities with it. Oval-shaped, it has a strong head compared to its body. Its ears are well developed, which is rare for a semi-underground species2. These provide it wih a very fine sense of hearing, up to several dozens of meters. It often features dark brown almond-shaped eyes and a black pupil. Its whiskers are white, although they may have other colours. These “moustaches” allow it to “smell” its environment. Finally, its incisor teeth are its only visible teeth. They are naturally yellow or orange when the degu does not have any diet issue.

The degu is a rodent the size of a small rat. It is thin and strong enough and a fast burrower. It can get on its hind legs, either standing with its body raised or to eat with its body folded in on itself. Its “hands” feature 4 fingers and a poorly developed thumb capable of easily holding food. It has strong claws capable of digging galleries but also to easily climb as well. Its hind limbs are strong and allow it to propel itself with high leaps. Thus, the degu can easily leap more than 80 cm high. Equipped with 5 fingers, they also feature long claws to dig. 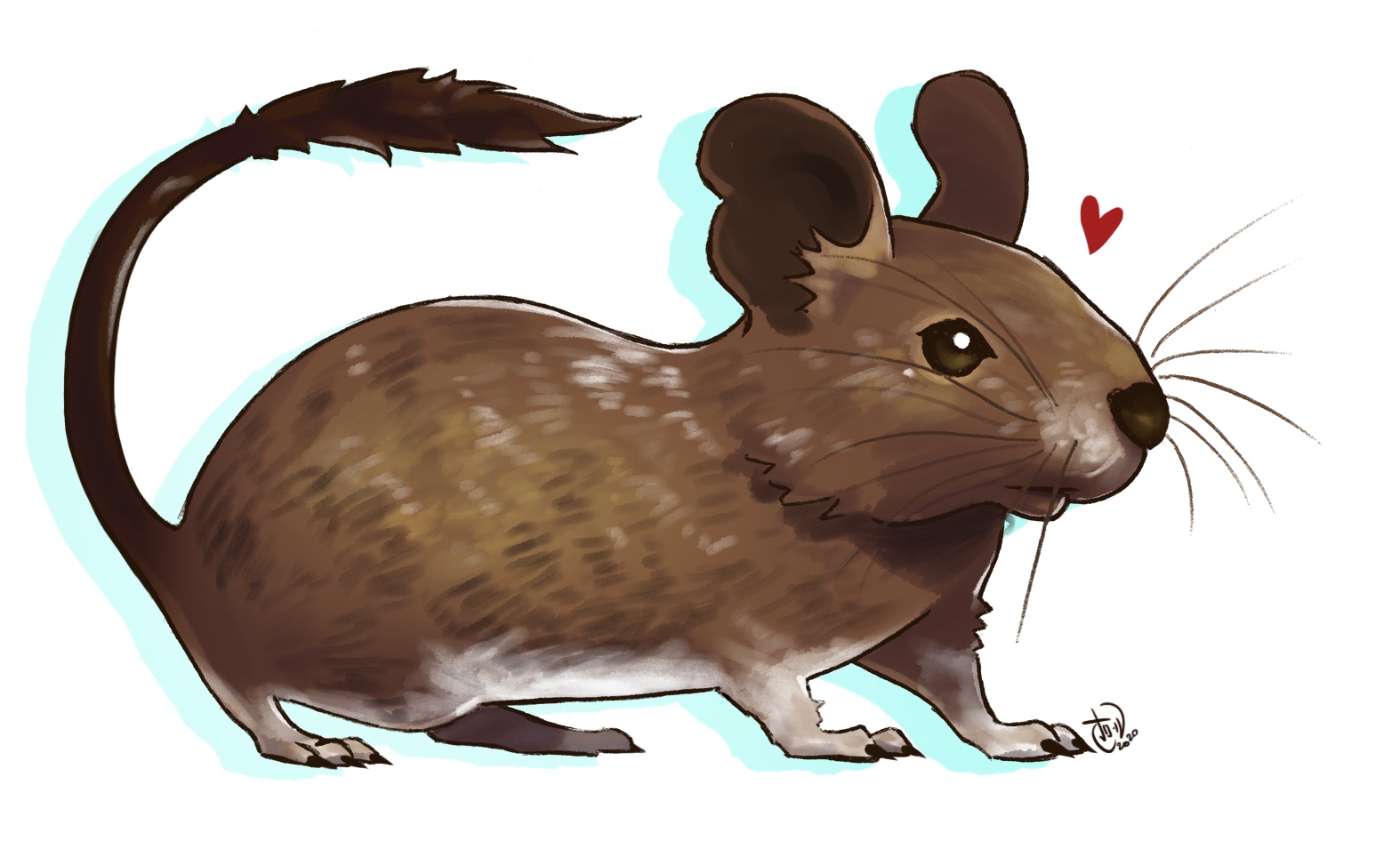 Attached to the base of its back, its tail is average tall. It is comprised of a thin and coarse coat, giving it a gray aspect. It ends with a small, long black-haired feather buster-like tip. Besides, it can break away, lezard style, if the degu is jeopardized.

Up to 30 cm, the degu is an average size rodent, close to the size of a rat. Its body measures on average 15 cm long with a 12 cm tail.

Degu’s weight varies depending on the seasons but ranges from 170 g for the thinner and up to 300 g for the biggest. In captivity, it is common to observe heavier degus, this is due to a lack of activity. Moreover, sterilized individuals tend to gain weight.

It displays a naturally agouti colour allowing it to camouflage3. It then has a brown coat dotted with black hair and brighter spots around its stomach, eyes and at the base of its ears.

Many coat variations are now available from individuals and breeders. These mutations are unfortunately created from recessive genes and degus sometimes encouter health issues dues to inbreeding.

Sexual dimorphism is not easily visible due to the degu morphology. The only means to define their gender is to compare the size between the anus and the genital papilla. This distance is less than 1 cm for a male whereas it is only a few millimeters with a female. We can also note the vagina between the anus and the papilla for females, which allows an easier distinction between individuals.