Proposal of categorization of degu species1.

The Octodon ricardojeda is a new species discovered in December 2020 and identified as an Octodontidae2. Its discovery, which follows a scientific study on genus Octodon specimens from museums, questions the species of degus. Biologists who discovered it (Guillermo D’Elía, Pablo Teta, Diego H. Verzi, Richard Cadenillas, and James L. Patton) also emphasize the need to reorganize the categorization of degus which could now be comprised of more than 5 species with local subspecies1, according to classifications and analysis results. It could range from 7 to 11 species according to the analysis. Named after Ricardo Ojeda, founder of SAREM3, Argentinian company studying mammals, thus the Octodon Ricardojeda is a degu species that can be found in Argentina.

The Octodon ricardojeda has a brown fur spotted with black and yellow, a brighter, yellow-gray stomach. Its fur is dotted with long black-yellow hairs, including on its back, from 15 to 20 millimeters long. It seems tough with a strong and short body. Its tail does not feature any feather-duster-like hair, and it is quite short, like other degus. It has long vibrissae which can be black or white. Its ears seem moderately long, covered with a thin gray fur. It can reach 32,6 cm long, with a 13,4 cm long tail for approximately 200g. 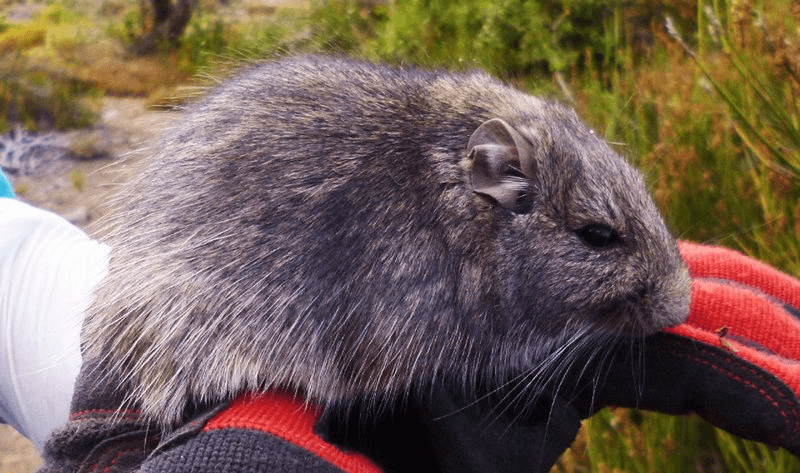 Unlike other species of Octodons, the Octodon ricardojeda mainly inhabits Argentina2. We can find it in 8 locations, west of Neuquén province. It seems to live between 500 and 1100 meters of altitude and has been found in the Reserva Nacional Malalcauello area northwest of Araucanía region, Chile. Some fossiles can be linked to the species, which could show a larger distribution for the last 10.000 years5.

Like other species of degus, Octodon ricardojeda  is herbivore with folivorous tendencies and feeds on plants, seeds and barks from its environment.

This species of degus has been captured in semi-open rainforest zones. They have been found in burrows, dug within sandy hills. Although, nothing proves that the Octodon ricardojeda digs them by itself or if it occupies those of other species. We can also find it in bushes or other kinds of glades. As well as other species of degus, it often inhabits bushy environments.

Like its peers, it is a prey, the Octodon ricardojeda is tracked by a lot of predators, whether they come from the sky or the ground. We can note the black-chested buzzard-eagle and the Lesser horned owl.

Taking into account the current state of knowledge, the Octodon ricardojeda is protected in the Lanín National Park, Argentina and in the Reserva Nacional Malalcahuello, Chile. It is likely to be found in other protected areas in its distribution area. Though, being restricted in a less than 20.000 square kilometers area and known in less than 10 locations, this species is considered as Vulnerable6 (VU). Habitat loss and forest destruction are among the main threats to this species of rodents which used to have a larger distribution in the recent past.