Introduction of the Octodon degus 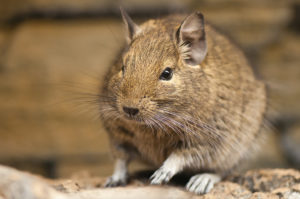 The Octodon degus is a small rodent from the Octodontidae species. Originating from South America and especially Chile, this rodent is has become an appreciated pet, considered as an exotic pet. The Octodon degus belongs to the degus group, comprised of 4 species. It is to date, the only one bred as a pet or laboratory animal.

Often confused with a gerbil, though the degu remains bigger and chunkier than the latter. With its squirrel-like head and its chincjillas-like ears, it stands out thanks to its quickness and its intelligence. Originally agouti, mutations occured and new colours appeared, such as sand or gray blue coats.

The degu is named after the shape of its teeth, indeed, its molar and premolar teeth are eight-shaped. Ethymologically, the generic term Octodon comes from the greek: “okto” means “eight” and “odus” means “tooth”.

Inhabiting dry environments, the degu is satisfied with little, having to deal with a difficult climate. Herbivore with folivore and granivore tendencies, it mainly feeds on vegetals stems, seeds but also roots. In captivity, the degu’s diet is a true challenge, because industrial food are not suitable for it and thus create a lot of health issues, including dental issues.

An animal with a complex behaviour

The degu is naturally gragarious, he then needs to live with its peers to feel good. Like the rabbits, every group has several clans, generally a male and some females, grouped in burrows. The male builds mounds in order to establish dominance and its position in the group. 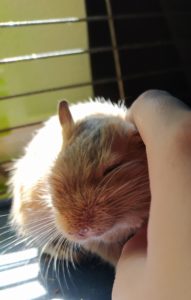 We can find it as a pet, often sold in pet shops. Although, the degu remains a small vivid rodent and is not always adapted to youth. Indeed, it is rather fearful and needs time to adapt to human beings. It is very vivid and does not like hugs and will tend to bite if one is trying to catch it. Aggressive in bad conditions, groups of degus will tend to violently fight each other. The owner’s lack of knowledge makes it often subject to abandonment. Though, good information and respecting its environment will make it a good everyday companion! 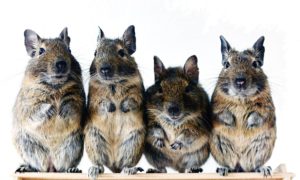 Wolrd of degus is aiming to introduce to you this very particuliar rodent. Indeed, a lot of degus owners are facing health or behaviour issues that can be easily prevented. Although, a few information about degus are available, and some of them are false. At Octodons.fr, we wish to provide a site dedicated to this small animal with reliable sources, such as scientific articles and studies. Moreover, we wish to share our knowledge so your animal can live in the best conditions!