The Octodon bridgesi is one of the 4 species of Octodontidae, like its peer the Octodon degus, it is an  endemic species from Chile1. It has been named after Thomas Bridge, who was one of the first to identify them2. Smoother and more muscular than our pet degus, the bridgesi features an even agouti colour, with lighter areas around the stomach. The bridgesi has the thickest hair of all other species. It is considered vulnerable on the IUCN red list3. To date, there is only a few information about the Octodon bridgesi.

Like other species, the Octodon bridgesi is native from Chile. It inhabits central Chile and its habitat tends to shrink because of human activity4. Indeed, its ecosystem shrunk because of the creation of agricultural plots. Although, we can also find it in Argentina, such as the Lanin National Park. In Chile, it inhabits the agricultural and forest Maule region. It can also be observed in Nahuelbuta in the Bío Bío and Araucanía Regions, across the Andes and all the way to Curicó. To date, we do not know the actual boundaries of its distribution area, even though we know it can be found between sea level and 1200 meters of altitude5. 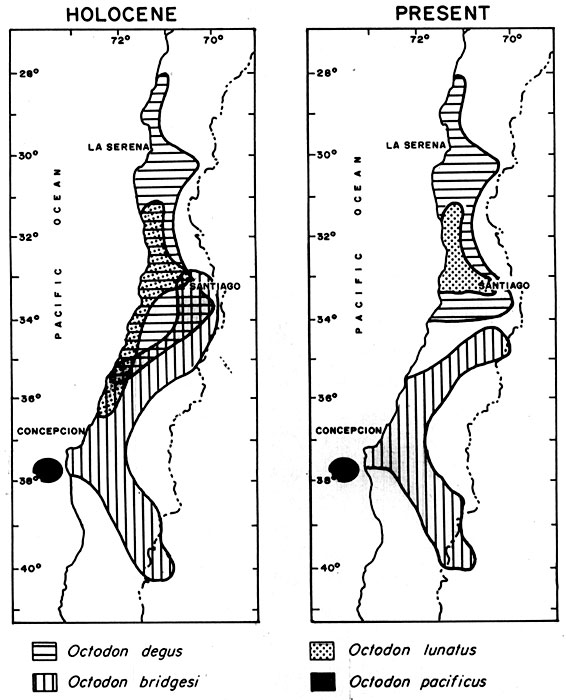 Geographical distribution of the different species of octodons in Chile, from the Holocene to date.

Like all species of Octodontidaes, it is a fossorial animal, but it does not dig burrows because it builds nests in dry grass or bushes. The Octodon bridgesi inhabits forest areas. It also inhabits mountains or Andean valleys. This species adapts to a lot of different environments. In rocks, it takes shelter in the thickets to hide from predators.

It encounters plants such as Aristotelia chilensis, Lithraea caustica, Peumus boldus, Gevuina avellana, Escallonia pulverulenta, Ugni molinae and Teline monspesulanum. These plants are also used to feed itself. In the Biobío River, it encounters Nothofagus dombeyi, Monkey Puzzle Tree and Nothofagus pumilio forests, but also Pinus radiata and other sclerophyllous environments. But like Octodon degus, it prefers bushy scrub areas, with a low tree density and free areas6.

As Octodon degus, it shares its habitat with some other rodents, such as Chinchilla-rat, “so called” parasite of degus’ burrows. Other animals it may encounter are the Coruro, the Aconaemys and the Southern viscacha.

As every rodent, Octodon bridgesi is a small easy prey for a lot of birds and average size mammals. Thus, this degu gets attacked by the Barn owl, representing up to 10% of their diet during winter. But other animals target it, such as Kodkods, or Culpeos. At last, it looks like even humans fed on it between 4400 and 1500 B.C.

With the introduction of invasive species, its habitat and natural resources can be destroyed by black rats, european rabbits or goats. 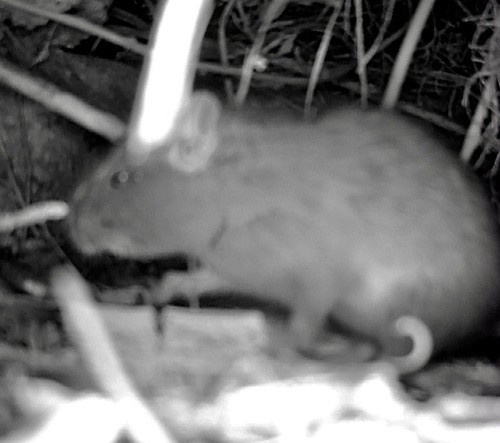 Some scientists agree with the fact that this species might be nocturnal, according to laboratory observations78 or directly in the field, like the Octodon lunatus. Inhabiting forests, it has a more skillful body, because it tends to climb trees to feed. It seems to be fond of  Monterey pines, which cover a large part of its diet6.

The bridgesi is a sociable animal, but without reaching the same population density as the Octodon degus9. Indeed, there are 8 individuals per hectare on average, varying from 2 to 8 indivuduals during winter and summer, up to 16-18 during spring and automn, during the breeding season. On average, females have the same breeding cycle as Octodon degus, but only give birth to 2 or 3 babies at a time.