The Octodon pacificus is one of the 4 species of Octodontidaes, to date, it inhabits Mocha Island, Chile, only. Is is considered as critically endangered on IUCN Redlist1. It was assumed to be exctinct until 2016, 56 years after its first description. We managed to find it out because of the discovery of the body of pregnant female, unfortunately poisoned2. It was scientifically described in 1994, by zoologist Rainer Hutterer3, although it was discovered way earlier, in 19594.  To date, it is the less known Octodontidae. 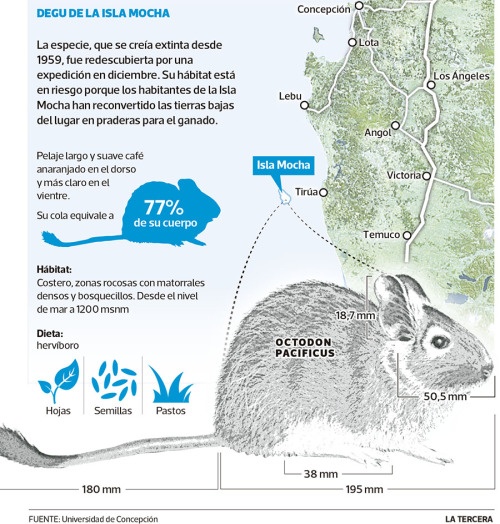 The Octodon pacificus  is present on Mocha island only. It owes its name to its geographical area, Mocha island being off Chilean coasts, Pacific side of South America. At the moment, no O. pacificus was found on the mainland. Unfortunately, its habitat is destroyed by human activity and invasive species, such as the black rat. This is why it is critically endangered2.

The Octodon pacificus is the biggest of its species, going up to 38cm. It has a brown coat, more orange than the Octodon degus, its stomach, around the eyes and ears being lighter. Finally, it has no tuft at the end of its tail.

Although, some scientists question the Octodon pacificus’ taxonomy4, because the genetic difference between the found individual on Mocha Island and Octodon bridgesi is only 0.3%. Thus, this tiny difference could be the result of an O. bridgesi variation related to its environment on the island. The latter can be found in a relatively close region around the Nahuelbuta Range. But it is only an hypothesis to date5.