Accueil » The degu, an invasive species?

The degu, an invasive species?

Is the Octodon degus an invasive species, and if so, will it be banned in some countries? The question of invasive animal species has been raised for several decades. Some species are well known for their invasive character, like the Florida turtle or the Egyptian goose. But what about the degu, which is already invasive in some parts of the world.

What is an invasive species ?

An invasive species is a species that has become established in an ecosystem and directly threatens the balance of the ecosystem. It is possible for some species to become established in environments without being invasive because they do not threaten the local fauna and flora. Most invasive species are the result of human activity1, whether they were introduced voluntarily or not. Invasive species are recognized as a cause of the destruction of natural habitats, as well as pollution, overexploitation of resources … 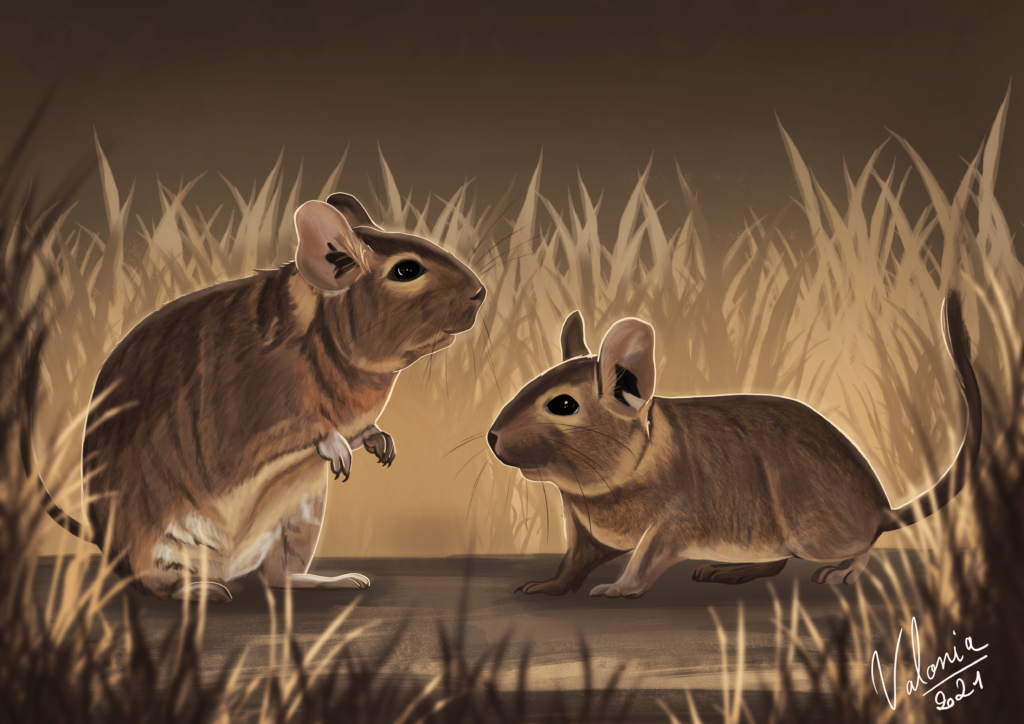 The degu is a relatively new pet. It was imported in France at the end of the last century before starting to become a pet. It is now offered all over the world as a companion in its own right. However, it is considered in many countries as a non-domestic animal and subject to laws on its possession and sale.

Wild degus have already been observed outside their natural geographic range2. They have probably been released by humans or have run away. However, this may present many risks, if it turns out that the degu is an invasive species in some ecosystems.

Legislation and keeping of the Octodon degus

In Europe, degus are most of the time considered as non-domestic animals, which makes their keeping conditional in specific cases. In France, for example, the breeding and the sale are subjected to the possession of a certificate of capacity3. 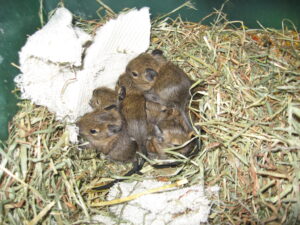 The young of Brindille, a few days after birth.

In the United States of America, it is forbidden in some states, as for the state of Georgia and California, but authorized without specific permit in other states as for Nebraska4, New Hampshire5, or Massachusetts6. In fact, the Octodon degus can be found almost everywhere in the United States without too many problems, even in states where it is supposed to be prohibited.

In Canada, it is not listed as an alien species to be monitored or subject to possession permits, however, it is prohibited to release them into the wild78.

In South America, it is not considered a pet and is rarely kept as such. It is mainly kept for scientific research.

In Asia, little information is available about them. Degus are sold in Japan in pet stores and many people keep them as pets.

In Australia, it is not listed as a prohibited species, but like most animals, it is prohibited from being imported into the country9. The same goes for New Zealand, which refuses the importation of pets other than dogs, cats, guinea pigs, rabbits and chinchillas10.

To date, the degu is not considered invasive in the world or in Europe11. However, it is very likely that wild populations can establish themselves in environments close to their natural habitat, or even adapt to new ecosystems. This is why it is necessary to control the populations of so-called “exotic” animals, to avoid that they are released in the wild.

Several degu have been found wandering in some countries, probably abandoned. But recently in Malta2, a colony was observed. The environmental monitoring authority must then assess the status of the species, which is potentially invasive. The degu has been present in Malta since 2018, and many individuals have been captured in various environments (Albert Town, at the Marsa golf course, at Wied Blandun, Corradino, Buskett, Girgenti, Wied l-Isqof and Wied il-Għasel). However, the establishment of a colony poses a serious environmental problem. Maltese degus seem to establish themselves in wetlands, which are suitable for their development12. 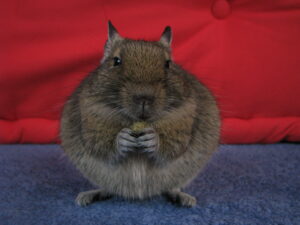 Whatever the reason, abandoning a pet should not be done in the wild. It poses real environmental problems and directly impacts local ecosystems. Moreover, the abandonment of the Octodon degus can lead to its prohibition in many countries, if it turns out to be an invasive species. It is always possible to give these animals to associations, which will take care of finding a new family for these rodents!

previousDegus colors
nextProposed law to fight against animal abuse, what future for the Octodon degus in France?