Octodons, whatever their species, are part of the Octodontidae family. It is a group of rodents, native to South America and located in Chile, Bolivia, Argentina and Peru. This family includes 8 genus1, 13 species (O. ricardojeda is not taken into account for the moment) and 3 subspecies2. Octodons are part of the genus Octodon, and are composed of 5 species3, including one discovered in 20204. 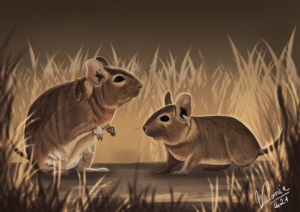 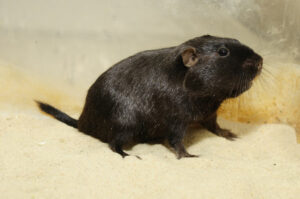 Octodontids are small rodents, which look like rats or mice5. They measure up to more than 20cm long and weigh in the 300g. Their tail is often long, and sometimes with a bushy “feather” depending on the species. These feathers tend to be amputated during encounters with predators. Octodontidae have a large head, a pointed nose and rather large and rounded ears. They have large vibrissae, which they use to complement their eyesight. Their legs are relatively short, with front legs with 4 toes and upper legs with 5 toes and with pointed and curved claws. One of the characteristics of octodontidae is their fur which can be quite long. This coat is dense and silky, and has a developed undercoat. Shorter hairs cover their tails, even forming a feather duster in some species. They often have long, stiff hairs that extend beyond the toes of the hind legs. Finally, with the exception of one species, most of them are grayish/brown and have lighter sides and bellies. Only Spalacopus has an almost entirely black fur. 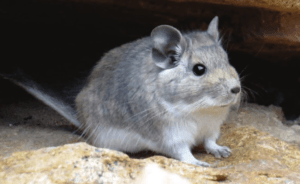 All members of the family are very good burrowers, and live in burrows. But we can notice that some spend more time underground, like Aconaemys and Spalacopus. Most of them live in colonies and show a complex social behavior, as for the octodon. All are mainly herbivorous. Octodons have become “agricultural pests” in some areas, as they can be very destructive. Octodontidae are mainly nocturnal, with some diurnal species.

Presentation of genera and species

The family of rodents Octodontidae, includes 8 genera of herbivorous rodents, which present many different behaviors. Present in South America, some members of this family cohabit in the same geographical areas. Octomys (Thomas 1920) is a surface rodent, while Octodontomys (Palmer 1903), Octodon (Bennett 1832) and Tympanoctomys (Yepes 1942) are burrowers. Aconaemys (Ameghino 1891) is semi-subterranean, while Spalacopus (Wagler 1832) is rather subterranean and stays most of the time in its burrow6.

We can notice that this family has only few species, 13 of which three Aconaemus and four octodons (without counting O. ricardojeda). All the other genera have only one species. Only the Scalapocus have subspecies, 3 in number.

The evolution of the family Octodontidae, through diversification7 of species occurred at the end of the Miocene, about 8.8 million years ago8, during the Tortonian period9. 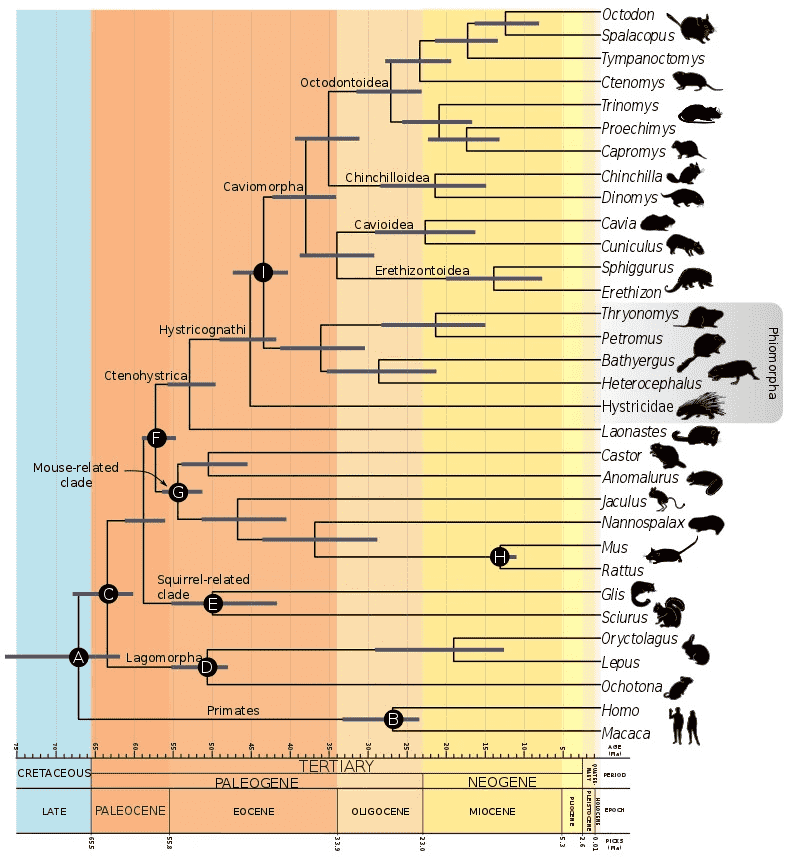 Time scale for the evolution of Hystricomorpha9.

Known under other names, such as the dègue, and named almost exclusively degu in English (even for the other species), the octodon owes its name to the shape of its teeth.  Indeed its premolars and molars are naturally in the shape of “8”. Etymologically, the generic term Octodon derives from the Greek language where : “okto” means “eight” and “odous”, “odontos” is the “tooth”10. 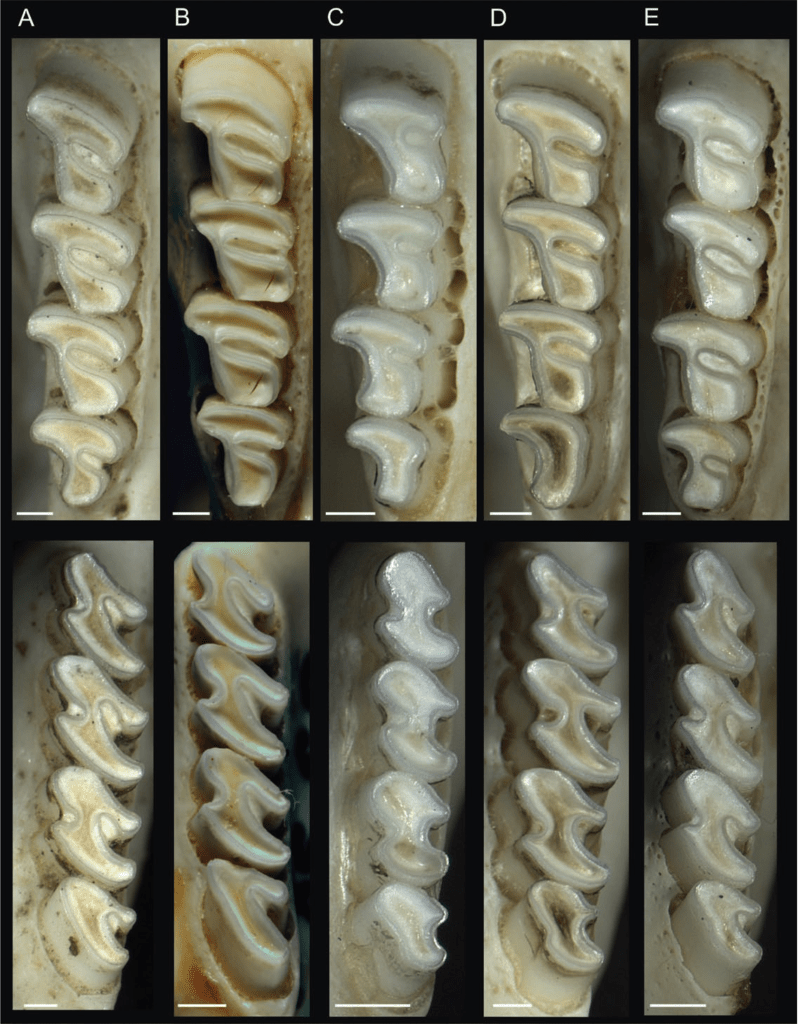 The first species of Octodontidae described was O. degus, with a type locality in Santiago, central Chile, by Molina in 178211. It is the only species of the genus that has several names available: Octodon clivorum by Thomas in 192712, Octodon cumingii by Bennett in 1832, O. getulinus by Poeppig in 1829, Octodon pallidus by Wagner in 1845 and Octodon peruana by Tschudi in 1845. But no subspecies is currently recognized 13 14, even if two subspecies were described 12 by Thomas, in 1927, Octodon degus degus and Octodon degus clivorum 13.

It was not until the middle of the 19th century, in 1945, that Octodon bridgesi (or bridgesii) was described, by Waterhouse15. Its territory was defined by Thomas in 1927, in the center of Chile, with a type locality in Río Teno, Colchagua12. It was not until 100 years later, in 1943, that the Octodon lunatus was described for the first time by Osgood16. He defined its type locality in Olmue, Province of Valparaiso. However, this new species of octodon was questioned by Tamayo and Frassinetti in the 1980s17, because it physically resembles O. bridgesi. However, lunatus and bridgesi have distinct DNA characteristics18. It was not until 1994 that Octodon pacificus was described and named by Hutterer, which would live only on the island Mocha 19.

From the end of the XXth century, the octodon is no longer considered as an endemic species in Chile 20 12 It is found in Peru 21, but especially in Argentina, thanks to archaeological research 22 23. Living populations, as well as traces found via birds of prey 24 show that these O. bridgesi are present in several places in Argentina 25. It is now recognized that there are populations north of Neuquén, Argentina. Questions were already raised 20 years ago about the species of octodon, when the species pacificus was discovered. In his publication, Hutterer 19 already questioned the Argentine populations of bridgesi, with the possibility that this one was another species. From gene analysis, Octodon pacificus has a specific distinction from O. bridgesi, although they have very similar genes 26). 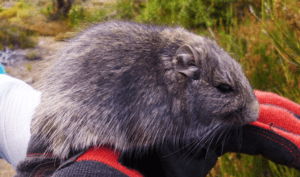 Towards a revision of the taxonomy? 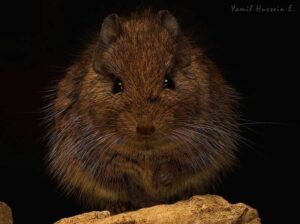 With the discovery of a new species of octodon, Octodon ricardojeda28), and in view of the numerous studies on this subject, it is important to conduct research on octodon species. Even without considering O. ricardojeda, it appears that Octodon bridgesi currently encompasses more than one species29. Some populations of O. brigesi, from the BioBio and Maule coastal areas are genetically and morphologically different from other populations of bridgesi. Scientists who have described Octodon ricardojeda, consider this variation as coastal, hence the name coastal Octodon bridgesi. Thus, this coastal form cannot be assigned to O. lunatus, its sister species. The two species are genetically and morphologically distinct. In addition, the two species have different chromosomes.

Studying Octodontidae in a global way, as well as doing studies with a large number of individuals would be relevant to (re)define the species of the genus Octodon. With a limited approach, it is still likely to discover one or more new species in this family. It is by integrating morphological and genetic variation within and between populations that reliable results could be obtained.

previousThe bowl, useful for the degu ?
nextDiabetes & Cataract in degus