Into the wild, degus diet varies depending on the seasons. Purely herbivorous, it has a folivorous tendency, it consumes mainly stems and leaves. It also feeds on fruits, roots and barks, which it finds during its explorations outside the burrows. In captivity, it is sensitive to various health problems. However, a good diet can easily prevent this. Unfortunately, most of the mixes sold especially for this species are unsuitable because they are rich in sugar and fat. These mixes are far from their habits in the wild. 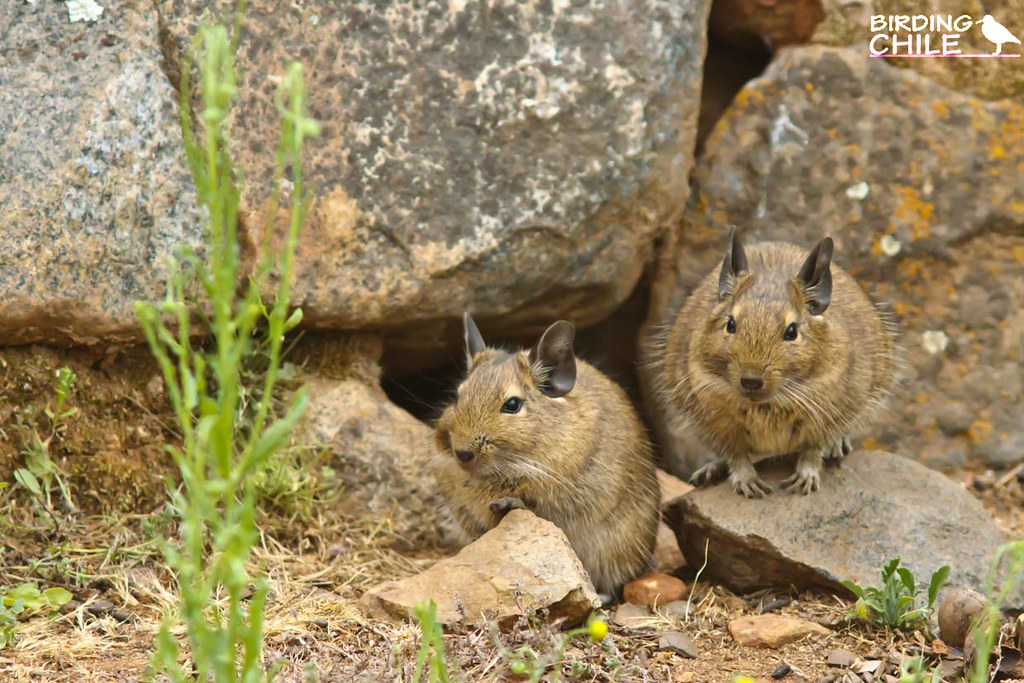 Degus diet into the wild

In its natural state, The degu spends much of its day seeking for food, this behavior is dictated by simple needs. Searching for seeds and plants keeps the degu busy with the goal of creating reserves or snacking on the spot. Mainly eating resources found on the ground, the degu will consume the grasses and roots it comes across. The Chilean degu tends to limit itself to the area around its burrow when it finds food in abundance. Several plants will be affected by its voracious appetite, such as the bark of Cestrum paqui or Mimosa cavenia1. We can also observe leaves from Erodium cicutarium, Proustia cuneifolia, Atriplex repunda, and also hawthorns fruits and thistle seeds like Agertum. It can also feed on other local vegetals such as Porlieria chilensis, Colliguaya odorifera, Kageneckia oblonga and Quillaja saponaria, P. pungens. Lithraea caustica, Chenopodium petiolare and Nassella pubi2.

A varied and complete diet 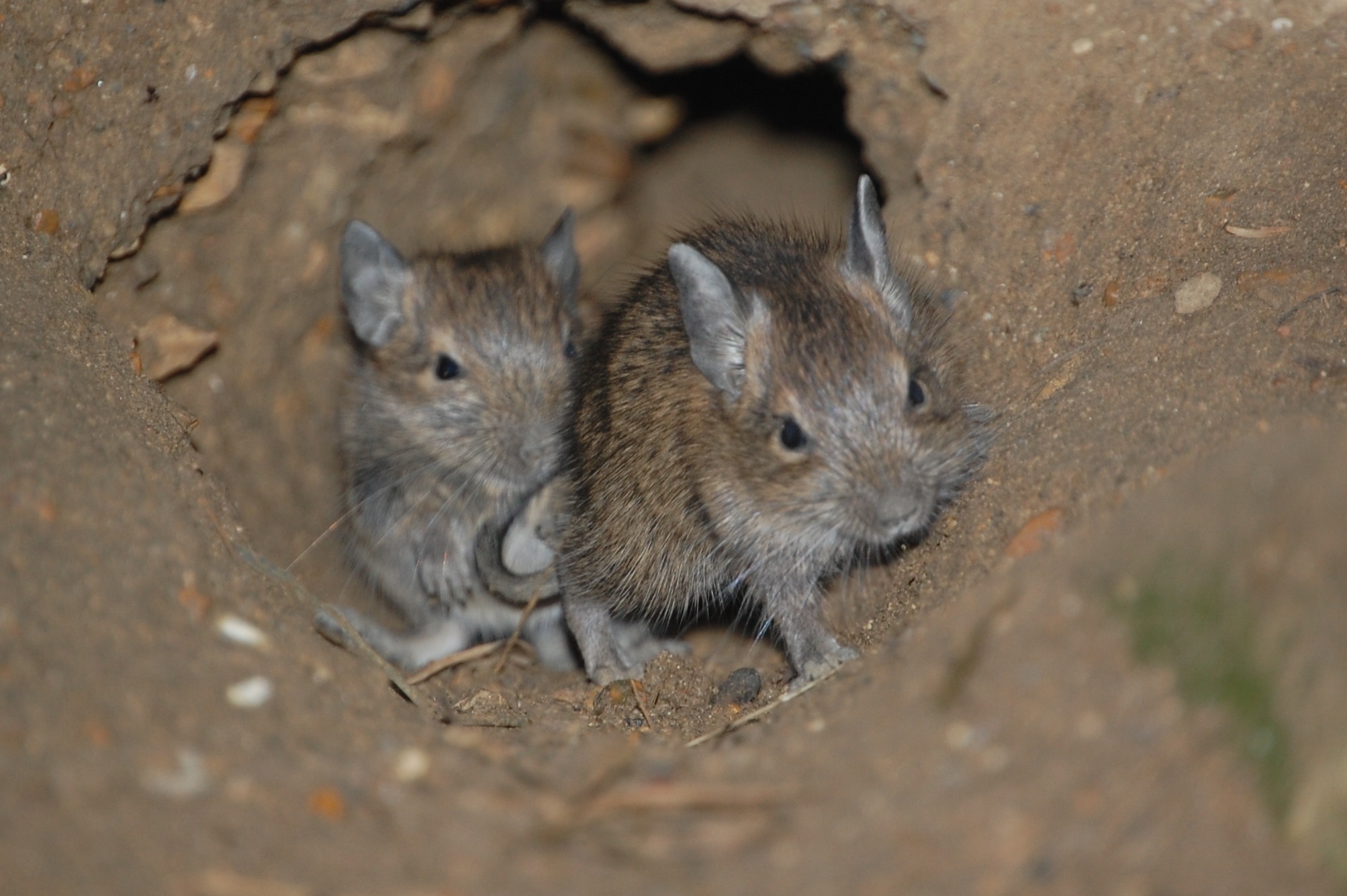 Extensive scientific study of the diet of degus indicates that while it feeds mainly on grasses and forbs, it partially eats acacia during dry months (January-April). This coincides with the periods when the conductive tissues of foliage and shrubs are most important. It is also possible that this consumption is related to water requirements in the dry season. However, seeds are an important part of the diet of degus, especially in late spring (November, 63.1%) and from summer to autumn (December-April, 29.3-60.0%). Shrub seeds become available mainly during dry months after flowering. The remaining seeds are probably present on the ground after the herbaceous growth has stopped. This represents a large energy reservoir, especially for baby degus, which seem to prefer grass seed3.

The way it feeds depends on the seasons and the climate. When the degu feeds on leaves, it prefers to eat the young shoots, rather than the more mature ones. This is probably because of its need for water and protein, which are available in greater quantities. In addition, if it can choose, it consumes plants with a high protein and low fibre content4. The degu seeks a high nitrogen intake, which determines its food selection when possible. Some scientists show that if the degu resides in a highly vegetated habitat, it is a “green desert”, as it feeds only on specific vegetation5.

The degu adapts to climatic conditions by stocking up on seeds to a greater or lesser extent. Thus, degus living at higher altitudes tend to store slightly more food than those in milder climates6, but they have more reserves. However, while the mass of seed accumulated varies, the amount eaten by each degu is not significantly different. Indeed, high altitude degus are often smaller and therefore consume less than others. 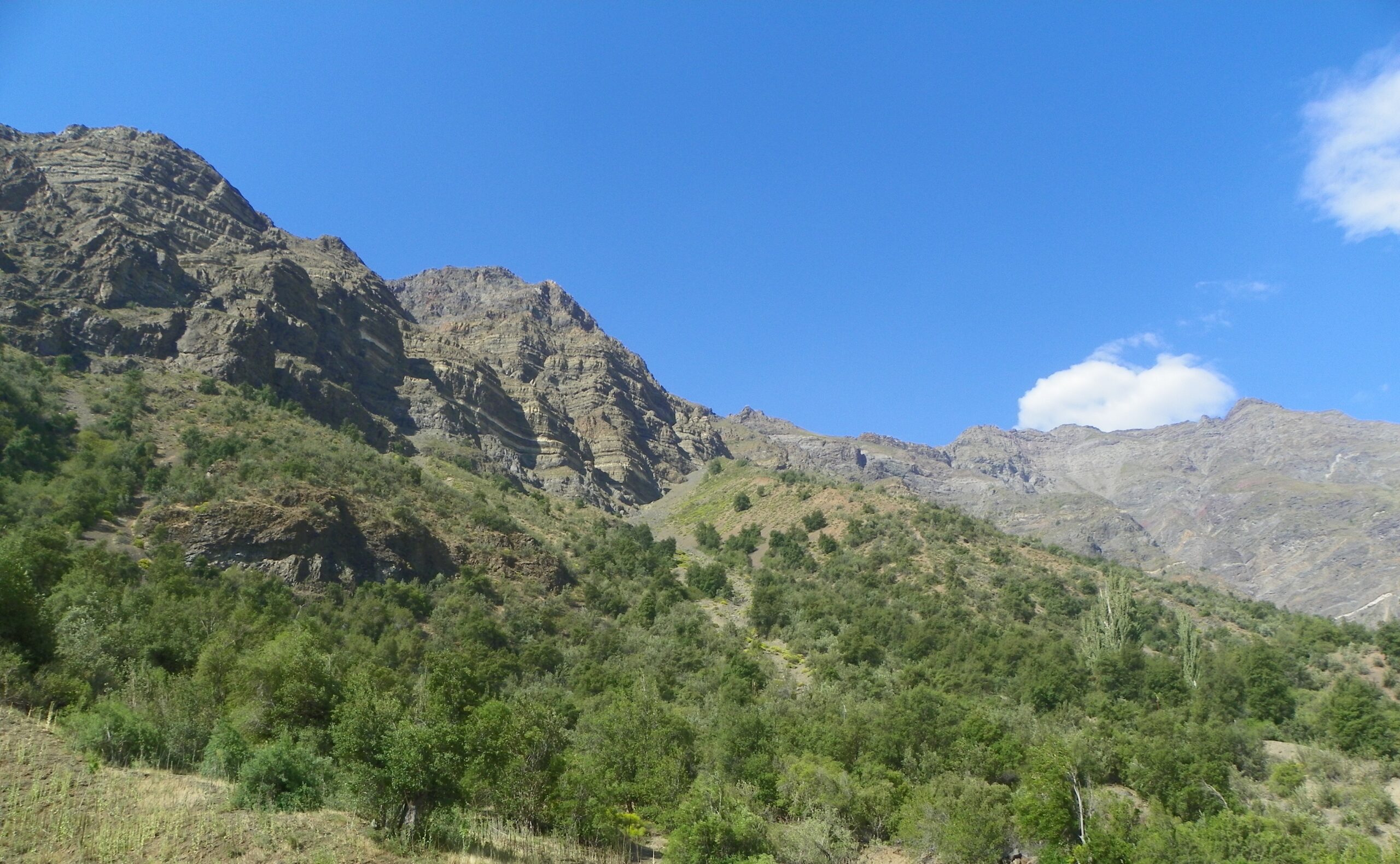 The degu is a species that can be found in several types of environments, from mountains, matorrals, forests and plains. It adapts to the varied climates that Chile offers, having colonised a large part of the country. As Chile has no large native herbivores, although goats have been introduced, the degu plays a major role in this ecosystem. It remains the most common rodent. Whether it is its feeding behaviour, its movements, its seed reserves or the way it builds its burrow, all these behaviours have an impact on its environment.

Plants such as foliage account for 60% of its food in the wild. It mainly consumes young leaves growing in its close vicinity. Unfortunately, this reduces the herbaceous cover, implying a greater heterogeneity of plants, sometimes to the advantage of native plants. Seeds are also part of its diet, although they are not its main food source. Through the dispersal of seeds7, it contributes to the natural seeding of plants. During its activities, it generally disperses them within a radius of 12 m. The paths it repeatedly takes create areas of dispersal around its burrow and the vegetation. In addition, the piles of branches and twigs around its lairs provide a suitable litter for the development of certain herbaceous plants. 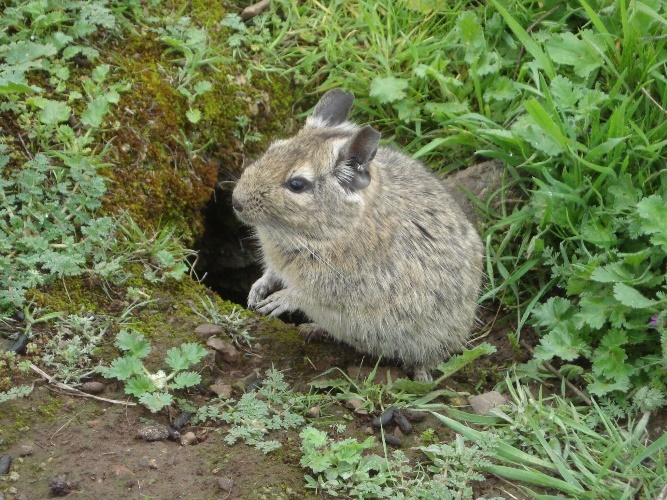 In a healthy matorral environment, the degu will not have a long-term negative influence. While it may restrict the growth of some shrubs, this will not have a significant impact on the overall ecosystem. Indeed, this behaviour is limited to the young shoots around the burrow. It will contribute to the dispersal of vegetation, via their seeds and fruits, without favouring the establishment of a species. Moreover, it does not show a preference for setting up its den under a particular plant, but will take into account the herbaceous cover8 thus avoiding the consumption of only one kind of bush.

In the most arid environments, the octodon will be more dependent on perennial food sources. Its droppings provide an important nutrient resource for the soil. This allows some annual plants that require rich soil to establish, such as Moscharia pinnatifida. Finally, thanks to its unique digestive system, the degu is able to assimilate high concentrations of cellulose. Some plants use this as a defence against herbivores, as is the case for many shrubs. This is why most ephemeral plants are not consumed by O. degus 9, but only transported to seed themselves along the way.

It is interesting to note that the degu lives alongside several rodent species, including Abrocoma bennettti, which is very similar to it in its feeding behaviour. However, these forced cohabitations do not seem to create competition for food2. In some regions, it also meets Akodon olivaceus, Abrothrix longipilis and Phyllotis darwini, without any feeding competition with these species. 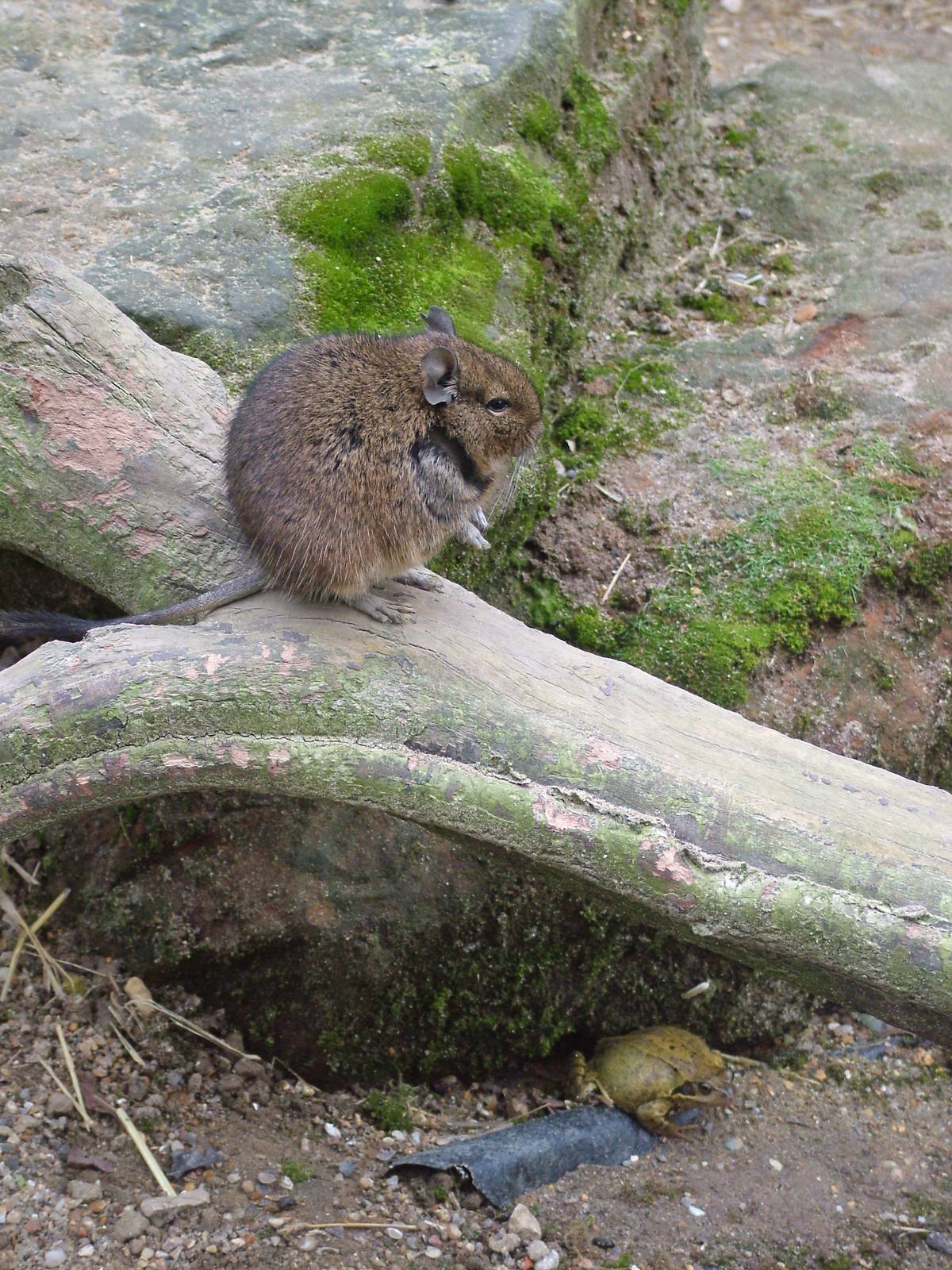 Octodon degu on a branch, in Tilgate nature centre

A long-term study on rodent diet and environmental impact was conducted in an area of dry thorny scrub in Bosques de Fray Jorge National Park. Rainfall is low and vegetation cover in spring is dominated by shrubs (59.6%) rather than grasses and forbs (21.7%). The consumption of herbaceous foliage is minimal, except in September and November (45.8-73.3%), and grass seeds never exceeded 6.9% of the degu diet. In contrast, shrub foliage was a year-round food source (44.6% vs. 18.7% at La Desha). One of the main shrubs present, Chenopodium petiolare, is a perennial with evergreen leaves. It probably provides moisture during the drier months. Octodons rarely inhabit habitats without hiding places, such as shrubs or rocks. But they are now found in degraded grasslands. Indeed, overgrazing, burning and drilling for fuel have favoured the invasion of shrubs such as Acacia caven, Lithraea caustica, Puya sp and Baccharis sp. While the diet of the degus includes various species, most of these plants are not eaten by livestock. Thus, their presence in these marginal agricultural areas seems to be more a consequence of human-related disturbances10

An environment to be protected

The degu therefore has an important role to play in its habitat, which it maintains through its consumption habits. Native species, such as hares and goats, have a negative impact on these fragile environments and on the octodon. Many alien plants have also been able to establish themselves in these environments. In addition, urban expansion and pollution tend to reduce the octodon population in these areas. These environments are very dependent on their ecosystems and therefore on their small inhabitants. Creating monitored and managed in an ecological way natural reserves has become essential to safeguard the degus and their natural environment.

previousComparison of mixes for degus
nextThe reproduction of Octodon degus