Accueil » Sounds and noises of the degus

Sounds and noises of the degus

The Octodon degus is a rodent with a large vocal repertoire, it uses many sounds, “cries” to communicate. The Octodon degus uses almost 20 different sounds, complex vocalizations used on a daily basis1, to “talk” with its fellow rodents and sometimes with humans. But it can also use other sounds, such as tapping its head2 ou sa queue contre le sol3. Finally, the degu often uses its teeth, by “clacking” to transmit messages. 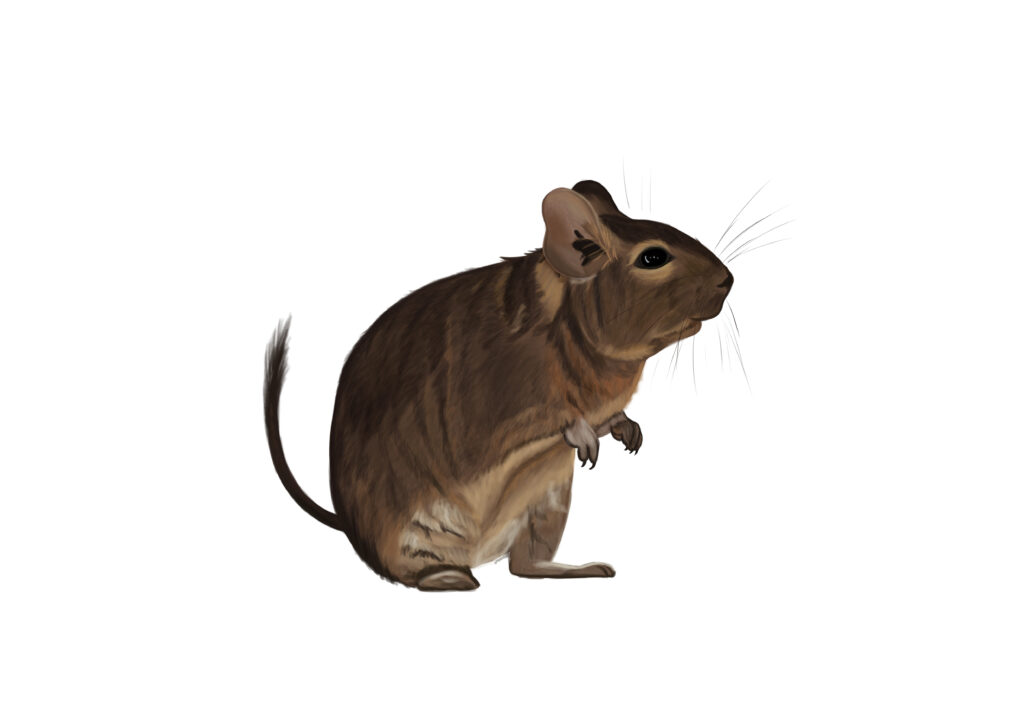 The calls of the degus

The degus uses about 15 different vocalizations to communicate4. This allows him to warn his fellow creatures of a danger, or to show his contentment during scratching sessions. All these vocalizations are different and can be observed in the wild as well as in captivity. In order to better understand its behavior, knowing the vocalizations allows to better determine what the degus is “saying”.

This is a rather soft and long sound, it is often used only once, although it is possible that the degus uses it successively. This call is often accompanied by a growl, and is directed towards a fellow animal. Often, the degus will also try to push its mate, with paws or shoulder, or turn away completely. This vocalization is produced during physical separation of two conspecifics, or during disputes over food. The conspecific may then back away, turn around or respond with grunts. Sometimes the two degus will push and/or kick each other.

This vocalization is probably used to warn and threaten a conspecific, hoping to repel it.

It is a rather harsh cry, which is used in a punctual way, often preceded by moaning. The growl can also be mixed with chirps towards foreign degus. This vocalization is used towards other octodons, to warn them, often before a fight. It is often accompanied by threatening behaviors, such as boxing. Mainly used by females, this call is triggered during arguments over food, but also during arguments with a congeneric. The conspecific should then move away from the degus having growled, but it can also kick and fight.

This vocalization is probably used as a threat to a conspecific, of a higher level than the whine.

It is a hoarse vocalization, used on average 3 times in a row, but can be emitted even longer. Often interspersed with chirps towards foreign degus, this call is used by the degus when one of its conspecifics is far from it. Almost exclusively used by females (97%), this call can be made when physically separated from a conspecific, or when encountering a foreign degu.

This rallying cry is directed towards a congeneric, with the aim of making it approach. It allows to check the individuals of the group and to reinforce its cohesion.

It is a rather soft and high-pitched call, rather short and usually vocalized only once. It is often accompanied by other sounds, such as social chirping, trilling or rallying call. The degus may accompany this call with tail beats. This vocalization is directed towards a conspecific, or used in a general way. Mainly used by females (93%), often during physical separation from a conspecific or during care of baby degus. The use of the “warble” can trigger other vocalizations and stimulate play.

The degus seems to use this call to express an emotional state such as pleasure or excitement, but also to trigger play with its fellows.

The “chirp” is a fairly soft modulated sound, used very often 3 times in a row. Mixed with other calls, such as whine, growl, rallying call and chirp. This sound is often used towards a conspecific, although it is not exclusive. Mainly used by females (73%), often during separation from conspecifics, or during arguments with “foreign” degus.

This cry seems to calm down the congenerics in order to avoid starting fights between degus.

It is a soft, repetitive and high-pitched vocalization, often used 4 times in a row. It is often used during meetings between degus, often during “kissing” sessions (mouth to nose contact), or during grooming. The degus also uses this call when meeting a fellow member of the social group.

This sound stimulates the response of the conspecific with the same vocalizations, oral contacts or grooming and is probably used as a greeting, a social reinforcement.

The “wheep” is a rather long call made by the degus, often repeated twice in a row, followed by periods of silence. It is mainly an “alarm”, which aims to stop the activities of the congeners and to watch the territory in order to warn of a potential or immediate danger.

This call often makes flee or stop the congeneric, within the framework of an alarm, often related to the appearance of a predator. In captivity, the degus can push this cry by fear, in particular in front of noises or movements which frighten it.

The degus is capable of powerful vocalizations, like the “squeal”. This call is often made only once, and preceded by more or less aggressive vocalizations, like the moan, the growl, or the “chirp”. This sound is often made towards a congeneric, but can sometimes be used in a more global way. It is most often used during fights with other degus, or during separation between degus. It has the effect to push away the “opponent” of the degus.

It can be both an involuntary vocalization during pain (pinching, bite), but also an alert towards a foreign degus, or even a predator.

The “pip” is a rather soft sound, often preceded by social chirps, it is vocalized only once by the degus. It is sometimes used during grooming sessions between degus, or directed towards a congeneric. The females seem to be the only ones to make this cry, from the care to the youngest or grooming to the members of the group. This cry makes stop momentarily the “kissing” sessions between degus, but some degus ignore it completely.

This vocalization can indicate to the conspecific that it is overly excited while grooming and can hurt the degus using it.

It is a hard, rather short vocalization, often used 3 times in a row. It is often followed by moans or grunts. It is a cry used by the Octodon degus during arguments within a group, between two familiar congeners, the goal being to make the congeners move away.

It would be a strong enough threat to repel a fellow animal or to warn it before attacking it. 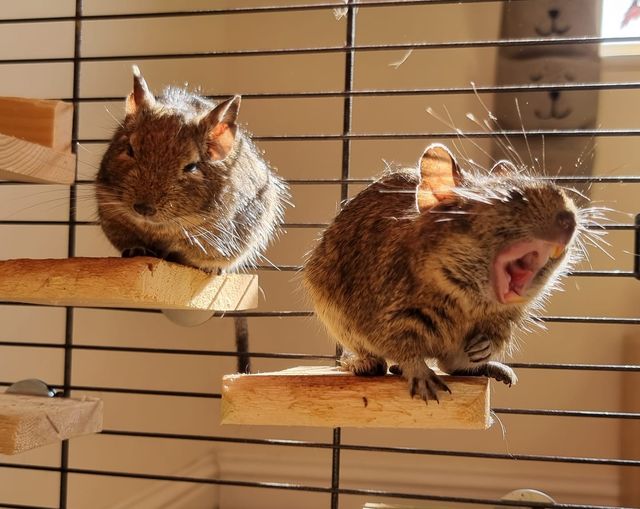 A short, loud and repetitive sound, used more than 10 times in a row, for periods up to 1 hour. It is a call made by males after mating, and sometimes by females after fights with outsiders. It can also be made as an alert to observe the environment. It allows the males to be more vigilant and the other degus to be silent.

After mating, it could be a territorial warning to neighboring degus. The females when they push it in case of intrusion, or possibly as an alarm.

It is a medium length call, often used 4 times in a row. It is used during the separation of two congeners. This cry is also used during a dominance phase, when one of the degus mounts the other. It is mainly used by males (83%), although some females also use it.

This call could be used by the degus to avoid that a congeneric mounts it to dominate it.

It is a soft and repetitive vocalization, of medium duration. It is uttered on average 5 times in a row, and is followed by “warbles” and “whines”. This sound is only used by the females, during the nursing or the care of the young.

Its actual function is not yet known, but it could provide a link with the baby degus.

It is a very loud whistle, which can be quite long, used one to 5 times in a row. It is sometimes interspersed with soft whistles. It is used by young degus when they are playing outside the family nest, or when they are alone. When the degus reach the age of 2 weeks, they almost stop using it. This whistle stimulates them to return to the nest. It is possible that this vocalization is “diverted” by the degus living alone to call their owners to come to take care of them, in this case, the pushed whistle can be very strong.

This vocalization is probably used to protect the babies from potential danger, and to make them return to the nest.

The soft whistle is a sound that is often used 3 times in a row, interspersed with moans and can be used with the loud whistle. It is used by the youngest5, during the care of the parents or eventually isolation. The young degus stop using it at about two weeks.

It seems that this cry made by the baby degus allows the members of the group to locate them. 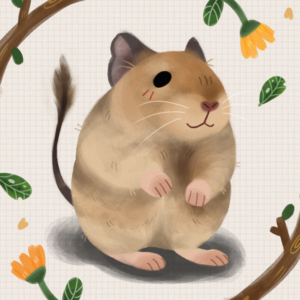 Illustration by a morning coffee

The degus can also use their teeth to communicate. Two types of “snapping” or “grinding” of teeth are identified in the degu. One type of snapping is passive, while the other is more “aggressive”.

The “aggressive” snapping of teeth is rather rapid and directly used towards a fellow dog. It is often accompanied by growling and whining. It is used to prevent a fight between two conspecifics, a kind of “alert” rather aggressive.

Very different from aggressive teeth grinding, this snapping sound is used by the degus when it is relaxed. It can be repeated, but only sometimes and is often accompanied by numerous yawns. This grinding is a relaxing sign, often before falling asleep. 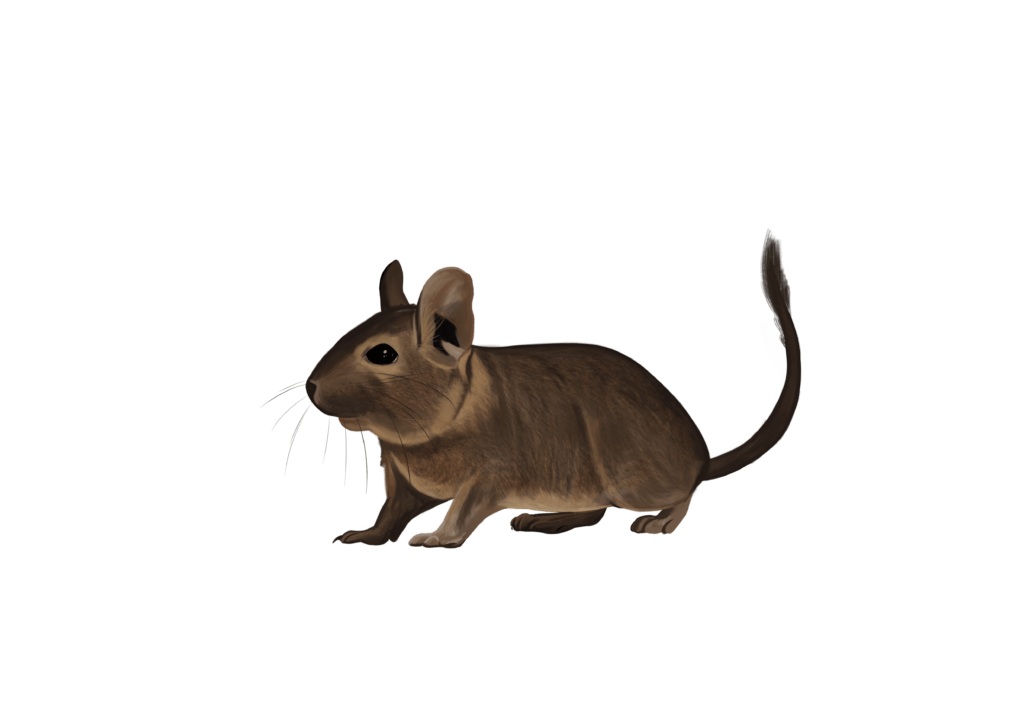 Other sounds produced by the Octodon degus

Degus can also use their tails to generate sounds, for this the degu strikes its tail rapidly on the ground3. The male degus uses this communication more frequently, when he is excited, especially just before mating. It can also be a sign of aggression towards another degus, usually a stranger to the group, before fighting.

Sometimes the degus “taps” its paws quickly on the ground, like rabbits. The sound produced alerts other degus in the vicinity6. This behavior is often accompanied by an alarm call. In captivity, degus make very little use of this drumming, as this alert is probably used to warn conspecifics in tunnels of danger at the surface.

Finally, octodons can also use their skull to communicate2. They tap the ceiling of the burrow with their heads to communicate between the different tunnels or other rooms. The degu also uses this method to loosen the earth to dig more easily.