Cancers and tumours in Octodon degus

Like most animals, it is possible for Octodon degus to develop cancers or tumours. Although these are less common than in rats or mice1, there are cases of tumors and cancers studied in degus. The Octodon degus is a rodent susceptible to various kinds of pathologies, such as diabetes, cataracts and dental malocclusions. Skin problems are also quite common. However, cancers and non-neoplastic tumours and masses are rather rare, although they may be related to dental problems. Odontoma2 is often seen in cases of malocclusion and can lead to cancer, hence the need to feed the degu properly. 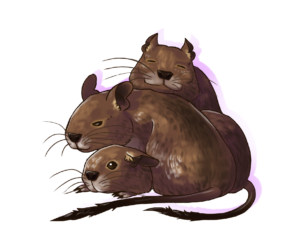 Tumours are a deformation of tissue, caused by abnormal reproduction of cells. Tumours can be benign or malignant (cancer). Although benign tumours do not have as widespread consequences as cancer, they can create equally serious complications. Depending on the location and size of the tumour, it can cause serious dysfunction of one or more organs and even lead to death.
Cancer is caused by abnormal behaviour of cells, which multiply excessively and sometimes form tumours. It is when these tumours are malignant (aggressive) that cancer occurs. This pathology causes many health problems and requires extensive treatment in humans.

There are also cases of non-neoplastic masses, i.e. a mass of tissue that has another source than cell proliferation3. It is therefore a non-cancerous mass, which is not a tumour. These masses can have many different causes.

Unfortunately, it is a pathology that is found in almost every living being, as it affects all multicellular beings. The oldest cancer ever diagnosed was found in a dinosaur

4 Centrosaurus apertus, which lived… 77 million years ago! In pets, there are now possibilities to treat cancer, but these are limited to dogs and cats5 6 and complex to implement7. For the degu, the operation to remove the tumour is often the only possible solution, in addition to a treatment to relieve the rodent.

Degus do not get cancer very often, as some studies show. Indeed, out of 300 octodons studied by the team of Dr. V. Jekl’s team, only 6 developed tumours2. Other data complement this diagnosis, with signs of tumours and non-neoplastic masses, both benign and non-benign, in 16 per 100 degus studied8, but these were older and often consulted for operations. Finally, one study found 7 tumours in a set of 189 rodents9.

Cancers and tumours are therefore relatively rare and tend to occur during the old age of the degu10. In most cases, removal is the only feasible solution, as cancer therapies were not (yet) possible in our pet rodents. 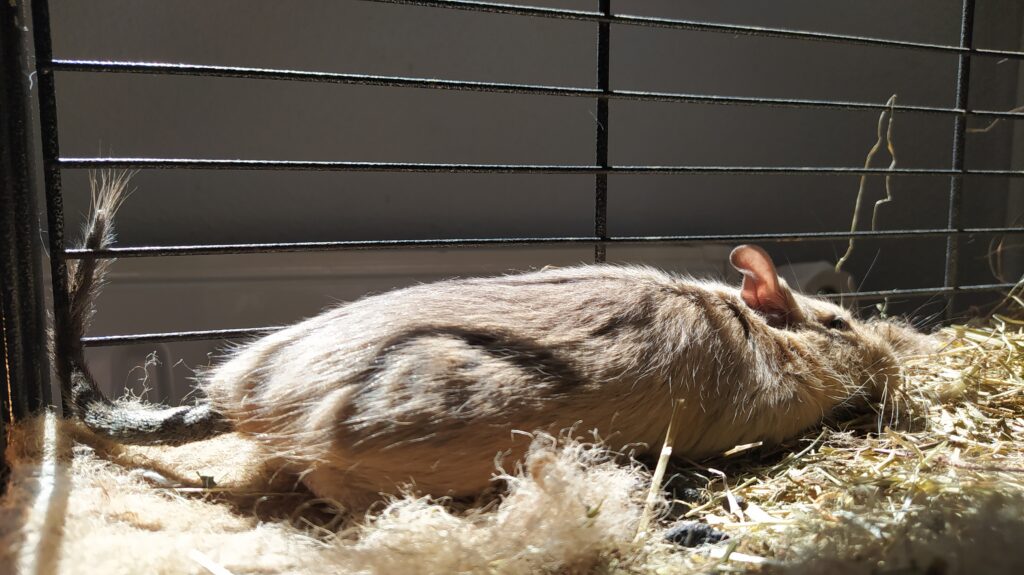 The risk of cancer can be related to several causes, some of which can be influenced to limit the risk:

The symptoms of the development of a tumour or cancer are very varied. It is necessary to weigh your pet regularly, as well as to handle it to be able to discover potential lumps. In octodons, the manifestations can be varied and depend on the type of cancer. Among these, we mainly find:

It is important, when a tumour is suspected, to consult a veterinarian as soon as possible to assess the animal’s health. It will then be possible to study the lump, either by taking samples or by medical imaging (X-rays or ultrasound, etc.). Only a veterinary professional will be able to provide an official diagnosis and carry out investigations, as well as treatment.

If there are treatments for the hamster17, the rat or the mouse18, these are often reserved for a scientific use and are not possible for our degus. Because of the cost, but also the complexity of administering the treatment, as well as the implementation of a decree tending to limit the environmental pollution of these treatments in pets7.

In most cases, an operation to remove the tumours is the only option, with treatment to reduce the effects of the operation and/or to improve the degu’s quality of life. 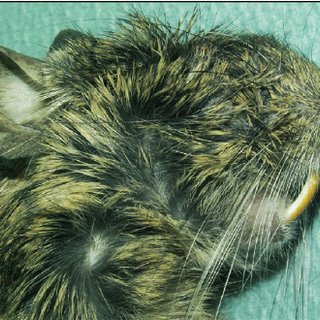 Neoplastic mass linked to an odontoma in Octodon degus.

Different types of cancers and tumours

The Octodon degus can deal with various types of cancers, or tumours. While some tumours can be generalised, others are notably very specific and can be linked to certain disorders. 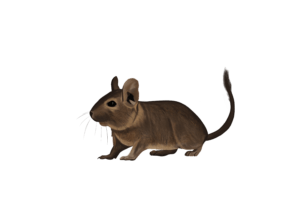 Degus can also have several types of tumours, those reported by research include 8 epithelial tumours, 13 mesenchymal tumours, 4 round cell tumours and 2 chordomas20. Other tumour types include splenic hemangioma, mesenteric lipoma, vaginal leiomyosarcoma (vaginal lesions, which are still very rare), fibrosarcoma (mass in fibrous connective tissue), and a case of transitional cell carcinoma in a kidney.

It can be assumed that cancers and tumours can, as in other rodents, affect all organs in the degu. It is difficult to treat other than by removing the tumour, even if this may lead to removal of a limb. Tumours and cancers being globally very rare, these diseases affect 0.04% of octodons, by making the average of the 3 studies, it is normal that these are still little known. In general, the pathologies and health problems of Chilean degus are not as well described as in other rodent species, although this is improving.

nextWhy (not) adopting a degu?