Accueil » Behavioral problems and stereotypies in the degus

Behavioral problems and stereotypies in the degus

In captivity, it is impossible to reproduce identically the conditions of the natural environment of the species. Even with adequate care, an adapted diet, the degus will not necessarily be in a state of well-being and will be able to present problem behaviors or even stereotypies. Among the dègues, we find a lot of individuals that bite the bars in a loop, mutilate themselves by pulling out fur or use the wheel in an unreasonable way. All of these behaviors are problematic and are a response of the animal to stress or discomfort. Behavioral problems are numerous in captive animals and can be distinguished in several categories, which can be divided into 2 groups: stereotypies and abnormal behaviors. These different behaviors can even appear simultaneously in some individuals.

Stereotypies are repeated and unchanging behaviors with known biological causes. These behaviors are induced by frustration, an attempt for the animal to adapt to its environment or a brain problem3. Stereotypies are long term and can last for years if left untreated. 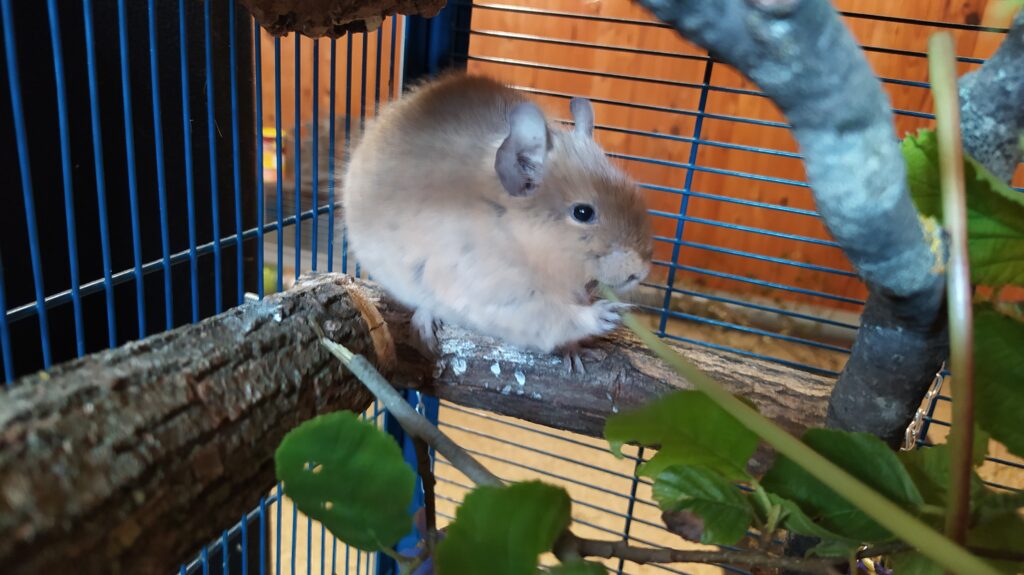 A complete plant diet is a good enrichment for the degus.

In the degus, the most common stereotypies are self-mutilation with loss of fur / mutilation of others by excessive grooming or incessant chewing of bars, which can even cause dental problems. Stereotypies are in fact a way for the animal to compensate for a lack, which recreates the variability present in nature. For example, an animal that paces up and down its cage or runs endlessly in its wheel is trying to find a way to repeat a need to explore its environment, often for the purpose of foraging. But since this behavior is constrained by the dimensions of the cage, it is repeated over and over again 5.

In general, behavioral problems such as stereotypies occur in degus for many reasons. A genetic source cannot be excluded in the formation of behavioral disorders and stereotypies, as well as a “learning” by repetition of the parents’ behavior6. Similarly, it is possible that an animal that has experienced intense stress during pregnancy will present young with behavioral problems that appear very early. 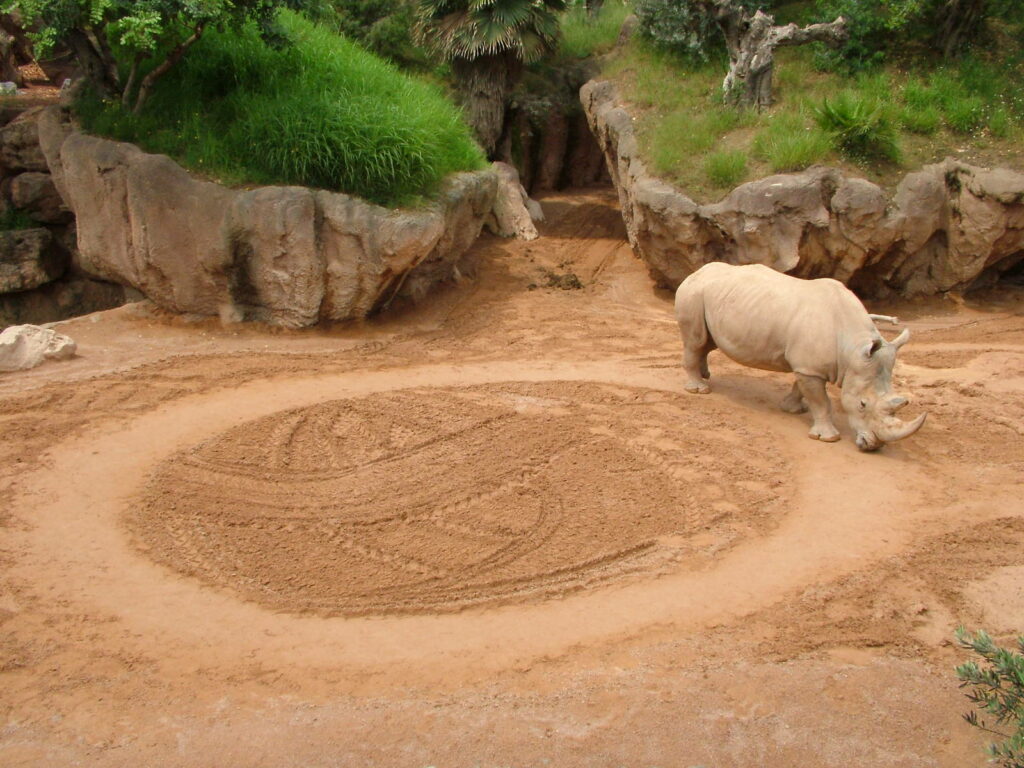 Repetitive walking or “pacing” of a white rhinoceros – Valencia

Some species live in environments where there is very little fluctuation (such as the panda) while others are less adaptable (such as giraffes) because of the lack of variability in the enclosures. The Octodon degus is a rodent that tends to periodically change territories, migrate social groups and thus have an environment that is regularly modified. In captivity, it is important to have a renewal of the cage to allow the degus to discover again.

One of the most likely causes for the development of stereotypies in rodents is the frustration of not being able to leave the cage. This may be due to separation from the mother or because the degus understands the difference between an open and closed cage.

Routine behaviors on the part of pet owners tend to make stereotypic behaviors worse or trigger them. In fact, there may be peaks in the expression of behavioral problems when owners are feeding their pets. This is due to the establishment of a certain habit, with the same gestures, the same sounds, the same words that increase the frustration in degus who know they will receive their food.

Main behavioral disorders and stereotypies of the Octodon degus

In captivity, different types of behaviors can be observed in the Octodon degus that are related to stereotypies. These are problematic if not dealt with quickly and can become dangerous for the animal and even annoying for the owner.

Bar biting is a very common stereotypy in rodents3, especially in the degus. This behavioral problem can have several causes: the desire to get out of the cage, frustration created by confinement or intensive stress. This translates into intensive chewing on the bars of the cage, sometimes with lateral movements or, when the bars are thin enough, chewing on two bars at the same time, released quickly. This behavior can also be observed with vertical bars, the degus then tilts the head sideways. In addition to being very noisy, this stereotypy can lead to dental problems, especially by weakening the incisors.

Self-mutilation or mutilation of mates in the degus is expressed by a pulling out of the fur, often very localized. During self-mutilation, the front legs are often depilated, sometimes the degus may even pull out the fur on the thighs. When this behavior problem is transferred to a partner, the hairless areas are found on the head, around the eyes and the muzzle, as well as on the back.

Misuse of the wheel

Some degus may also exhibit wheel abuse. This stereotypy is not yet well documented and is not well known, so it is difficult to define a threshold of use that would be beyond the typical time of use of the degus. However, the wheel may also be used by some degus when they are frightened and trying to escape.

This behavioral problem is well known in gerbils3 and can be found, more rarely, in the degus. The animal will then tend to dig in a loop, often in the same place of its cage.

The degus is known to be a destructive rodent, but some of these destructive behaviors, such as the total annihilation of a cage component, can be considered as a stereotypy induced by frustration or even a behavioral problem related to its territory. It is possible to improve the daily life of degus with behavior and stereotypy problems. This requires determining the cause of the bad behavior in order to make the appropriate changes5. Often, the causes are easy to identify and many solutions are available to mitigate or stop these behaviors in the degus. Cage too small for the number of living degus inside

First of all, and for all types of behavioral problems, it is necessary to ask the question of the space given to the degus. The Octodon degus is a semi-furrowing animal, although it is a good climber, its natural environment remains the ground and it needs a sufficient space to run and move. Cages adapted to the degus are at least 1m long, ideally ferret cages or large aviaries, fitted out with different trays to allow “flat” movements. To know if your cage is big enough, it is possible to refer to the CARA charter, which advises a minimum floor space of 18000cm² (with floors) for two degus.

The reproduction of their natural way of moving influences the behavioral problems of rodents. Thus, it is important not to create a cage where the degus will only climb when this species is used to long movements on the ground. The degus is not similar to a squirrel and the cage design should take this into account.

Some rodent stereotypies are also related to a lack of hiding places and shelters in the habitat. In the wild, when a degus detects a predator, it will tend to freeze and then seek shelter (burrow, bushes, …) as quickly as possible. It is important that in captivity, this behavior can be reproduced by arranging hiding places in several places of the cage.

Routines can create many behavioral problems, such as chewing on the bars or frustration expressed by the repetition of certain movements. To reduce or stop stereotypies, especially those related to feeding times, it is enough to break the routine: every day, simply change the feeding time, the bedtime, etc…. 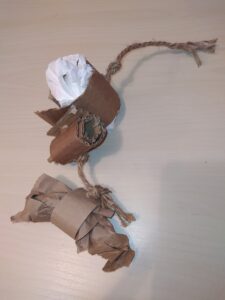 Some behavioral problems, such as self-mutilation can also come from a lack of activity. It is interesting, when some degus start to develop these disorders, to propose 1 wheel per degus and many other activities, to see if it improves the well being of the animal.

Enrichments are to be proposed regularly to the degus, to maintain their curiosity and to occupy them in time. The most interesting enrichment for the degus in captivity is to remove all the bowls to hide the food everywhere in the cage or to set up puzzles (a crumpled sheet of paper with food inside, etc…) to increase the duration of the enrichments. In general, other enrichments can be made, such as the addition of temporary natural elements (earthen pots, stones, branches, etc…). Fresh or dried whole food (a dandelion foot, a complete branch of hazelnut tree, …) also allows to bring novelties to the degus.